El Fulminador comes back from his remix dungeon with a Disco House version of a track by the Psychedelic Rock band “No Darling”. This time, the producer transforms the epic rock anthem ”Spaceship” into an elegant house suite with crystalline percussion, echoing piano chords and long evolving vocals.

This is the second collaboration between El Fulminador and No Darling, the first being the remix for the track “Today Blue”, released in 2017 as part of the album “Transmisser”. The original version of “Spaceship” can be found in the same album. 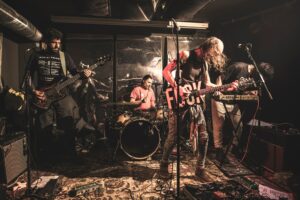 El Fulminador is an Argentinian artist based in Berlin. Head of Fulmen Records with his partner Utopyk Jones, he has a long-lasting career that includes the production of albums, EPs and soundtracks, a prolific activity as a remix producer and collaborations with several artists on different side projects. Follow: Soundcloud / Facebook